The "Kick Drum Rule" ensures your drum beats not only groove, but also stand out from the crowd. But first... Tea!

99% of producers in popular music these days program drum beats that sound like every other producer’s beats. This is mainly because they use the same handful of kick drum patterns. In fact, many producers even import one/two-bar drum loops as the foundation for new songs. But, when we try to write creative music on top of a generic one-size-fits-all foundation, we will never reach the artistic heights we can by writing our own original drum beats!

And original drum beats don’t just form a unique foundation for your music, they also weave themselves into your other layers and actually influence what you write for those other instruments.

To prove how a creative drum beat can bring your music to life, we’ll use a super boring chord progression for our example. In fact, this is one of the most overused progressions in popular music. But, after we apply our Kick Drum Rule to the drum beat, you’ll witness a total transformation as this predictable rubbish is turned into a vibrant and captivating section, all thanks to the drums!

But first, here’s what it sounds/looks like with a generic one-size-fits-all drum beat.

MIDI Screenshot:  Generic drum beat, like you hear in most songs

So, what is our Kick Drum Rule? Well, before we get to that, we need to do a quick overview of the drum kit and each element’s function.

There are four elements to the drum kit: cymbals, snare, toms, and kick. The main function of the cymbals is to connect the drum beat with the pulse of the song (i.e. 1/4 notes in the 4|4 time signature). The snare is the main injection of energy for a drum beat, so where you play your snare will determine how energetic the section feels. Toms add variety to your drums. And lastly, the kick drum brings the groove to a drum beat. And by the way, drum beats are also known as drum grooves or drum patterns.

We’re focusing on the kick in this lesson, but if you wanna go deep and learn how to use each of the four elements based on their specific functions, then read our new PDF: Hack Drum Beats. This PDF is your ultimate guide to writing captivating drum beats, and it also comes with MIDI file examples. 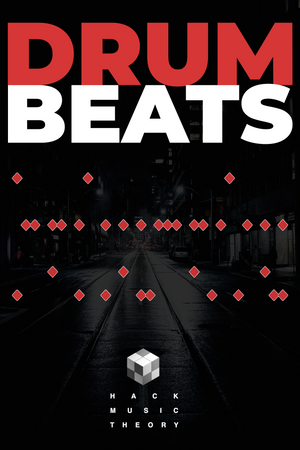 Alright, let’s jump in! So, for our example we’ve set up eight bars, and as almost all popular music is in the 4|4 time signature, we’ll use it too.

So as you know, the kick’s function is to bring the groove to a drum beat. But what exactly is groove? Well, there are many different definitions, but we define groove as being a rhythm that contains a magic balance of on-beat notes and off-beat notes (i.e. syncopation). Unless you’re specifically going for a rigid four-on-the-floor drum beat, too many on-beat notes will make your drums sound stiff. On the other hand, too many off-beat notes will make your drums sound like a mess, so you gotta find that magic sweet spot!

As you’ll have noticed by now, the cymbals and snare are fairly limited in their possibilities. They have very specific functions, and they need to stick to those. For example, if you switched their roles and played the pulse on the snare and a backbeat on the hats, your drum beat would sound backwards and completely wrong to most people.

This limitation is not good news for creative people like you. However, there is one element of a drum beat where we can get away with almost anything... Yep, the kick drum!

And with that, it’s finally time to reveal our Kick Drum Rule, which is to write an interesting kick drum pattern at least four bars long. As the kick is the only element in a drum beat where you can express whatever you want (without it sounding wrong), don’t waste this golden opportunity for total creative freedom!

Now, there are tons of different ways to get artistic and express what you want through your kick drum pattern, but remember that its job is to bring the groove, so play around with a combination of on-beat and off-beat notes. Most importantly though, is to break free from those extremely limiting one/two-bar drum loops, so be sure your kick pattern is at least four bars long.

Arguably the best way to inject a massive dose of creativity into your kick pattern, though, is to use a polymeter. If you’re new to the term “polymeter”, it’s just the fancy word for playing in two or more time signatures at once. Okay so now you’re probably thinking: but that’s gonna sound really weird! And full disclosure here, it can sound weird, if that’s what you want. On the other hand, if you want it to sound accessible (like we did in our final example, which is below), then that’s easy to achieve! And if you want a step-by-step guide to creating a polymeter in your drums, then that’s also in our new Hack Drum Beats PDF.

Alright, let’s have a listen to a Before & After playthrough now (click Play above for the video, or below for the Podcast), where the Before version uses a generic kick pattern like most songs, and the After version uses our Kick Drum Rule with a polymeter. We hope you found this lesson helpful, and thanks for being here in the Hack Music Theory community, we appreciate you!